When closely examining a Forex currency pair chart, traders can identify various patterns that can help them figure out market momentum and market psychology for that specific currency pair.

Pattern identification alone is not enough to trade successfully, but when combined with technical indicators and other trading tools patterns can provide useful insight that can allow traders to make better informed and more calculated decisions.

Chart Patterns are classified into:

In an uptrend, the Head & Shoulders pattern consists of 3 consecutive high peaks. The first and last peaks are almost equal in height and the middle peak is much higher than the other two. When taken together they roughly resemble a head resting on shoulders, hence the name. The relative lows between the head and each shoulder form the neckline. The neckline is seen as a key support level. The market movement can either reverse off it or break through it.

A Head & Shoulders on the downtrend with 3 consecutive low peaks is called a Reverse Head & Shoulders. When the price crosses the neckline, it can signal a reversal upwards or break through.

One of the easiest patterns to recognize, a double top is an uptrend formation of a series of taller high peaks and shorter high peaks. It is a horizontal line that connects two high peaks at the same price. If price fails to break above the first peak and the second peak remains at the same price, then it can be an indication that the trend may reverse.

Double Top patterns can signal opportunities to sell. The relative low between the two peaks is also called the neckline and can be a potential entry point to sell if there is confirmation that the price will break. An example of such an indication is when a candle closes below the relative low/neckline.

The inversion of the Double Top is called Double Bottom which is formed when in a downtrend the price failed twice to break through. Double Bottom Patterns can signal opportunities to buy above the neckline after indication and confirmation of an imminent reversal.

Similar to a Double Tops pattern, the Triple Tops pattern has an extra high peak that’s on the same resistance level. A third Top creates a strong resistance level with a neckline that connects the middle two relative lows. Traders can enter a selling position when the daily candle closes below the third peak neckline. Entry points can be set a few points under the low of the candle that closed below the line first.

An inverted Triple Top is a Triple Bottom. The third bottom is seen as a strong support level and can provide an opportunity to enter a buying position if there are indications and confirmation that there’s going to be a triple bottom reversal. Usually, traders wait until the price closes above the neckline and buy when the next candle exceeds the high of the first candle.

A very slow long-term developing pattern, the Saucer Bottom usually doesn’t have a clear entry point and gives no direct positioning signals. This pattern represents a progressive loss of downtrend momentum that is followed by consolidation in a sideways market with a potential higher trend return. Saucers are visible only on weekly, monthly and yearly charts because it takes long from them to develop. Because of this, entry points need to be determined with Technical Analysis. 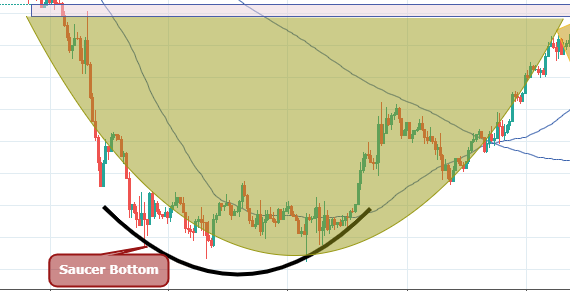 Continuation Patterns exist within trends where prices consolidate before continuing in the direction of the original trend.

Trend lines that converge form Triangles. As trade lines converge volatility contracts which signals a possible upcoming breakout. When it comes to Triangles, it is not their shape that Is important but the direction of the breakout; the signal to trade is provided by the breakout direction.

When one of the triangle’s trend lines breaks a market breakout towards the direction of the break is expected. Before the breakout, traders are unsure in which direction the price will move. This psychological uncertainty is what ends up forming the narrow angle, or tip of the triangle.

Triangles are categorized into: Symmetrical, Ascending and Descending

Has two equal sides which slope at the same angle towards one another. It usually signals a continuation of market movement in the same direction as the overall trend. A Symmetrical Triangle is a rising support line and a descending resistance line converging on the right side of the chart. One of these lines will eventually be broken and when it does traders take the line as a simple trend line. With symmetrical triangles is sometimes difficult to predict which direction the price will breakout. Therefore, attention to the original trend is vitally important. 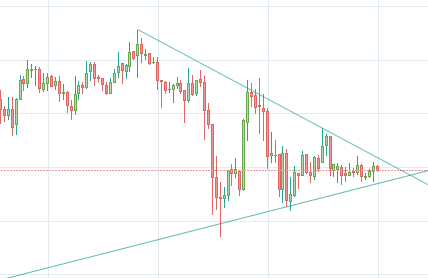 Ascending Triangles are formed in upward trends and signal continuation of the upward trend. Above the ascending triangle’s longest line (hypotenuse) is a straight trend line, which traders view as a key resistance level. When that resistance is confirmed that it is about to be broken it can signal that market control is at the hands of buyers, suggesting an opportunity to buy.

A Descending Triangle has a downward sloping hypotenuse at the top. Beneath it is a straight trend line. When the market breaks through this line then it signals that sellers are dominating, and it could suggest an opportunity for opening selling positions. Descending Triangles mostly appear in downward trending markets and usually signal the continuation of the downward trend.

Flags and Pennants can be seen in fast moving trends showing short consolidation periods. They come after a sharp move that forms a nearly vertical line and the consolidation they show is against the direction of the trend.

A signal on a Flag or Pennant usually happens in the direction of the original move and when it breaks it continues the trend. 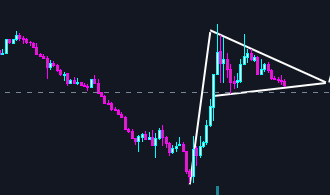 Wedge formations are variations of Ascending & Descending Triangle Patterns but with both angled sides sloping against the dominant market trend. Wedges, like Triangles, show either up-trending or down-trending consolidation of the market. Once support and resistance levels derived from the wedge are broken, it signals the continuation of the trend in its original direction. Wedges signal price consolidation and are rarely used to deduce which direction the price will be breaking through. 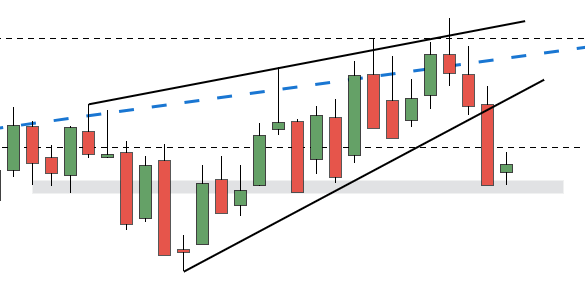 Usually one of the easiest patterns to identify, Rectangles form a trading range between two parallel horizontal lines. Rectangles show consolidation of the move that came before it and suggests a continuation of another move towards the same direction.

Rectangles can be used in both uptrends and downtrends and like other Continuation Patterns the signal occurs upon breakout. Rectangle reversals can happen only if the breakout returns towards the original trend before the creation of the pattern.

The patterns above are the most common pattern formations found in forex trading charts. While patterns on their own aren’t enough for trading, when combined with technical analysis tools such as indicators and trendlines they can help traders spot opportunities and minimize their risk exposure. Market Insight allows the creation of finely calculated trading plans with a better chance of success.

When it comes to Forex Trading, there is nothing more important than practice and experience. We suggest to all traders, novice and advanced alike, to practice on a free demo account with virtual currency before trading the markets with real money. A free demo account is the best tool to practice chart analysis, placing trades and experiment with your wildest ideas and hypothetical scenarios without risking invested capital.

Find answers to the most frequent trading questions.

Learn how to trade the markets effectively.